Jacqueline Graff of Metairie rings her own personal Katrina bell following the memorial at the 17th Street Canal levee breach on 8-29-06. 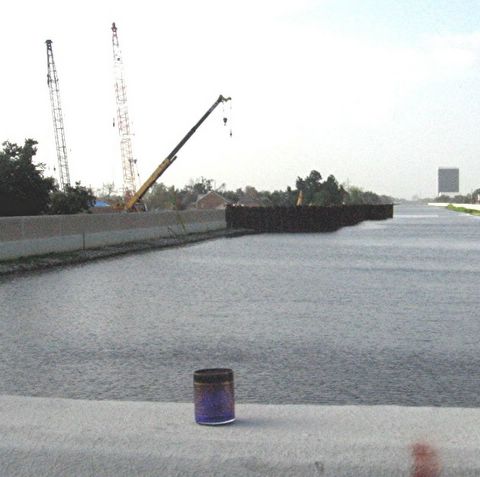 A purple and gold, fleur-de-lis votive candle on the railing of the bridge over the 17th Street Canal at the levee breech, with the cofferdamn temporary repair seen in the backround. I found this on the morning of 8-29-2006 as I arrived to attend the memorial service on the anniversary of the Federal Flood.

The roses tossed into the canal in memory of the dead are being taken by the wind and current toward the head of the canal. They are driven like us all toward home.

At the 17th St Canal for the memorial. A small crowd of perhaps 40 and a half dozen camera crews. The new pipes to the backup pumps for the new floodgate structure at the mouth of the canal look impressively large, unless you've seeb the mammoth pipes that feed the Wood pumps at the station at the head of the canal.

Look What Washed Up

Posted by George "Loki" Williams at Sunday, August 27, 2006
Well the conference is over, and the Rising Tide Blog begins its roll. (Hey Po' Blog, want to join the party? You seemed into the idea.)

Being a gathering of bloggers we even have some lovely detailed notes and quotes provided by both Maitri (the loud indian girl) and Scout Prime (one of our favorite adopted NOLABloggers). So as of this evening here are links to the posts made about the first Rising Tide:

Dangerblond - Wilson/Landrieu, this blond has the dirt. A must read for after watching Scout's Video

Oyster - Rising to the occasion

Peggy Wilson on the Landrieus

Posted by Mark Folse at Sunday, August 27, 2006
From Peter's Adrastos site, video of an outburst by former City Councilwoman and losing mayoral candidate, Peggy Wilson, in response to a question about race and the Landrieu family. Peter was moderator of the political forum, which featured Wilson, Micheal Duplantier and Shane Landry, along with blogger Bayou St. John David of Moldy City. The person interrupting to ask for proof of Wilson's allegation is blogger Kim of DangerBlond, who offered a widely reported reward for any evidence of corruption in the Landrieu family that went unclaimed during the campaign last spring.

Posted by George "Loki" Williams at Sunday, August 27, 2006
Well I made it yesterday despite illness and exhaustion only to find that I could not do voicecasts. Everytime I tried an outgoing call on the cell I got a "Network Busy" responce. Same thing on the other three phones I used. So much for Oral History Project material from the conference.

Had to leave early being unwell, but not before seeing several of the panels and meeting a new array of local bloggers. Once I am feeling better I will post some data.

Scout Prime's last remark on the problem of La politics & It:''we had our own political corruption thing going on in Wisconsin...and people pass silly laws (but) I'd challenge any American city to do better than you are right now.''

G-Bitch on a friends reaction to It and the importance of NOLA: ''she said,'I didn't know N.O. was that important until I went to the store and said, where's the coffee.''

Ashley on my question About our NOLA focus and should we write more about Rita and Pearlington: ''they don't have to gut...there's nothing left...they have to rebuild and that's a totally different problem''.

Ashley talks about changing his flight From Prague to NOLA to Chicago and Amerian Airlines asking why. ''Because it's not f------ there!'' ''I had to let out everything there (on the blog)''.

Personal viewpoints panel: G-Bitch, Suspect Device, Scout Prime & Josh Britton & Ashley discuss their experiences blogging about It. Scout Prime says she blogs about It because ''it's a disgrace.'' Greg Peters (Suspecy Device) says his last cartoon's last panel ended with what !merica knows about what's going on in NOLA: ''Nothing.They know nothing.''

Cooperstarts with a story about his inlaws who stayed. ''I don't think they expected Ray Nagin to save them but they expected the federal government would...everyone should wonder what their government will do for them...in the next disaster'' Bloch opens with an Economist clipon journalism and blogging...''when you have an event like this you become the front line reporters...&omeland Secuurity was in a desperate search for ground truth...and it was all out there on the internet.''

We have about fifty in attendance as we start with Chris Cooper and Robert Bloch. The coffee is AWOL which is hard on a set of bloggers coming out of last night's social.

Posted by Mark Folse at Friday, August 25, 2006
To start, we’d like to address, and in fact break down, the false dichotomy between Blogging and Journalism. A lot has been written on the subject. I think one of the best summaries is by Jay Rosen-blogger and journalist—on his PRESSthink site.

Typically, the debate about blogs today is framed as a duel to the death between old and new journalism. Many bloggers see themselves as a Web-borne vanguard, striking blows for truth-telling authenticity against the media-monopoly empire.
Many newsroom journalists see bloggers as wannabe amateurs badly in need of some skills and some editors.

This debate is stupidly reductive -- an inevitable byproduct of (I'll don my blogger-sympathizer hat here) the traditional media's insistent habit of framing all change in terms of a "who wins and who loses?" calculus. The rise of blogs does not equal the death of professional journalism. The media world is not a zero-sum game. Increasingly, in fact, the Internet is turning it into a symbiotic ecosystem -- in which the different parts feed off one another and the whole thing grows. …

Later in the same piece, he quotes an exchange between Xeni Jardin, co-editor of the hugely popular BoingBoing, and John Schwartz of the New York Times. Jarin says arguing about whether blogs would replace the major news media is like asking "will farmers' markets replace restaurants?"

"One is a place for rich raw materials," she continued. "One represents a different stage of the process." Blogging from the tsunami, she said, is "more raw and immediate," but the postings still lack the level of trust that has been earned by more established media. "There is no ombudsman for the blogosphere," she said. "One will not replace the other, but I think the two together are good for each other."

So we want to start off by asking our panel which includes bloggers and journalists, about this division.
0 comments

Posted by Mark Folse at Friday, August 25, 2006
The Rising Tide Conference will be a gathering for all who wish to learn more and do more to assist New Orleans' recovery from the aftermath of the natural disasters of both Hurricane Katrina and Rita, the manmade disaster of the levee and floodwall collapses, and the incompetence of government on all levels.

I am planning on using this site to send updates on the Rising Tide conference of New Orleans bloggers discussing blogging and the Federal Flood formerly known as Hurricane Katrina. Since my laptop is off-line, I'm going to send notes here from my crackberry pager during the day.

I will probably share the address with some fellow bloggers at the conference, so not all comments are mine. Please keep that in mind.