Posted by mominem at Tuesday, June 29, 2010
One of the now traditional events at the Annual Rising Tide Conference is the recognition of the winner of the annual Ashley Morris Award. This year we are pleased to open up the nominations to the entire New Orleans Internet Community. We are asking everyone to submit their nominations for this award by commenting on this post. 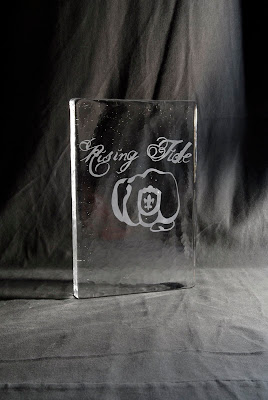 The Ashley Morris Award
The Ashley Morris award was established in 2008 to honor and remember one of the founding members of Rising Tide, Dr. Ashley Morris. It is presented in cooperation with Hana Morris. The award is given annually to someone who embodies Ashley's fierce passionate defense of New Orleans, its people and its culture.

2006 Dr. Ashley Morris (retroactively and posthumously). Ashley was a major figure in the New Orleans Internet community and beyond. He carried his love for New Orleans literally on sleeve, or rather under it in the form of a very large fleur-de-lis tattoo. His famously fierce and profane reactions to any attack on New Orleans became legendary in the months and years after the Federal Flood. His larger than life personality still resonates as one of the inspirations for the Treme character Creighton Bernette, played by John Goodman. Bernette has been known to speak words originally written by Ashley. Ashley's blog is still available, check out the greatest hits.

2007 Matt McBride (retroactively). Matt chronicled the construction of the temporary pumps and other features of the flood protection system of New Orleans. Matt's detailed research and on site observations showed that a committed person with the right knowledge can make a difference. Matt continues to cover the work on New Orleans Flood Protection at Fix the Pumps.

2008 Karen Gadbois quoting from Gambit's January 2009 recognition of Karen as A New Orleanian of the year for 2008;

... armed with little more than a laptop and a digital camera, singlehandedly blew the whistle on the New Orleans Affordable Housing scandal, which she documented on her blog, www.squanderedheritage.com. The result? An FBI investigation, admiring writeups of her efforts in The New York Times and The Wall Street Journal, and new respect for the power of the citizen blogger.

Karen later won a Dupont Award for her work with Lee Zurik on a 50 part series exposing problems with NOAH. She also has since founded The Lens, a non-profit investigative news site that works with WDSU Fox8 on joint investigations.

2009 Ashe Dambala a.k.a. The American Zombie. Writing anonymously about the shenanigans in the City Hall IT department publishing rumors and reports from insiders Dambala had the whole Meffert/Nagin scam long before it surfaced in the main stream media. He had the goods and Meffert is now under indictment. Jason Berry has revealed he is Dambala.

Like a lot of things connected with Rising Tide the qualifications are flexible and subject to subjective interpretation. The organizers of Rising Tide will consider all nominations when deciding who to honor. The Award will be announced at Rising Tide V, August 28.

This year's Rising Tide Conference is coming Friday, August 27th and Saturday, August 28th, the days immediately before the 5th anniversary of Hurricane Katrina and the flood that followed the failure of the Federal levees in New Orleans. This year we'll gather at The Howlin' Wolf, 907 South Peters, New Orleans. Here's a little more information about The Howlin' Wolf, a venue known for showcasing local music and musicians, from their website:

The Howlin' Wolf has a long history as one of New Orleans' finest locally owned and operated venues. Named after the legendary bluesman Chester Burnett, New Orleans was introduced to the Howlin' Wolf in 1988, when it opened up in Fat City. After outgrowing its' space in a cotton warehouse, the venue relocated to what was previously the New Orleans Music Hall, in the Warehouse District.

With the recent broadcast of the first season of Treme on HBO and the disastrous ongoing catastrophic engineering failure poisoning the Gulf of Mexico, the future of New Orleans has become a national topic again, and although there are no easy answers, Rising Tide strives to encourage dialog about the important questions that need to be asked. Expect panel discussions on Crime, Environment and Politics, with a special presentation on The Levees and a Keynote speaker to be announced. Sign up now and stay tuned.

There will again be a Friday night meet and greet social, and this year we'll offer an expanded local vendor marketplace. More details will be coming soon.

For now, head over to the Rising Tide EventBrite page and register. The cost for pre-registration is just $20 and includes breakfast pastries with beverages, a great lunch and Friday night (cash bar). You can let us know as much or as little as you like when you register. On August 1st, registration fees are $25 and, space available, it will be $30 at the door. If you have any questions, please feel free to contact us at registration@risingtidenola.com. We can't wait to see y'all there.