Posted by Sophmom at Sunday, July 27, 2008
This year's Rising Tide registration fee is $20 in advance, $25 on conference weekend. Of course, donations are also welcome. After making your purchase or donation, you'll receive a confirmation email. The Rising Tide package includes:


Our registration PayPal is now online at right.

We're looking forward to seeing you all there. Please feel free to visit the Rising Tide Website and contact us with any questions or suggestions. You can also leave comments on this blog.

This is shaping up to be the best Rising Tide Conference yet! Click here to see the Rising Tide Flickr Pool for pictures of RT I & RT II!

John Barry, author of Rising Tide: The Great Mississippi Flood of 1927 and How It Changed America, will be keynote speaker at the third annual Rising Tide Conference sponsored by the NOLA Bloggers, a community of writers, citizen journalists and on-line advocates for the rebirth of New Orleans.

Barry is the prize-winning and New York Times best-selling author whose books have won more than twenty awards. In 2005 the National Academy of Sciences named The Great Influenza, a study of the 1918 pandemic, the year’s outstanding book on science or medicine, and the Center for Biodefense and Emerging Pathogens gave Barry its 2005 “September Eleventh Award.” Rising Tide: The Great Mississippi Flood of 1927 and How It Changed America, won the 1998 Francis Parkman Prize of the Society of American Historians for the year’s best book of American history.

The annual conference started in the wake of Hurricane Katrina and the subsequent flooding of the city when a small group of New Orleans, La.-based bloggers decided to expand their on-line advocacy for the rebirth of New Orleans into a public event. The third annual conference will be held Aug. 22-24 2008. Saturday’s main event will take place at the Zeitgeist Multi-disciplinary Arts Center, 1724 Oretha Castle Haley Blvd (@ Felicity) New Orleans, LA 70113. 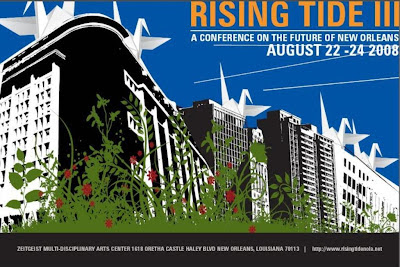 We are going to have to use paste pots to put these up, or they will fly off the walls as fast as they go up. Hell, even Fred Radtke will want one to add to his collection.
If you're wondering where the hell the cranes we were promised are, join us in New Orleans August 22-24 to help solve this riddle.