Greg does it again.

Posted by mominem at Friday, July 31, 2009
Greg Peters has come up with a great T shirt design for Rising Tide 4 I'm pleased to present it to everyone. 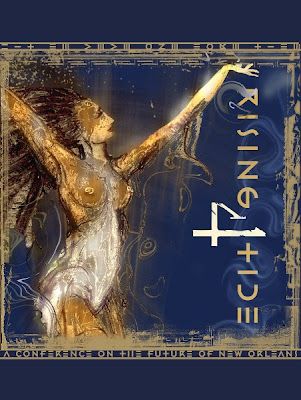 If you haven't already registered and bought a T shirt click on the image above to do it NOW!

Our Latest and Greatest

Posted by Leigh C. at Thursday, July 30, 2009
Our webmaestro Varg has the revamped official Rising Tide website up and at 'em!

RT organizer and blogger Mark Folse provides the scoop on the panel he's putting together:

I am working with NOLA Slate on a panel on the state of New Orleans culture, with panelists who will speak on the state of parading, food and music culture in the city in Year Four after the Federal Flood. Speaking on parading culture will be Edward Buckner of The Porch Seventh Ward Culture Organization and the Original Big 7 Social Aid and Pleasure Club Our food panelist will be Susan Tucker, editor of New Orleans Cuisine: Fourteen Signature Dishes and Their Histories. Our music panelist will be Bruce Raeburn of the Hogan Jazz Archive and author of New Orleans Style and the Writing of American Jazz History.

I myself am not without news:

After all this time, the results of a recent study have linked the stresses of post-federal flood life - including the scanty access to hospitals, pharmacies, and treatment by health care professionals - to a greater incidence of heart attacks in area residents...

The health care panel at this year's Rising Tide conference will explore this sad fact of post 8-29 living, as well as many other related subjects. Moderated by public health Ph.D. candidate and local blogger Holly Scheib, the participants will be: Cecile Tebo, crisis unit coordinator for the NOPD and one of New Orleans magazine's Top Ten Female Achievers; Dr Elmore Rigamer, medical director of Catholic Charities; and Sean Fitzmorris, local EMT and administrator of New Orleans EMTs Sound Off!

Keynoter Harry Shearer contributes to TPM Cafe and gets his Derek Smalls on for The Daily Show...

...and we are greatly encouraged by those who have registered and proclaimed their intention to attend. Looking forward to seeing you all.

Get registered before the cost rises on August 12th.

Posted by Leigh C. at Saturday, July 25, 2009
Our registration link is up and running. Head over to this link to get in on the Rising Tide 4 fun.

Some explanations of our conference fees:

The ever-popular Rising Tide koozie, to keep that beer sweat off your hands and enable you to live blog, is $6.
A poster of our orisha, designed by Greg Peters, is $15.
A t-shirt, available in sizes M, L, XL, and XXL, is $20.

The American Zombie fully approves of our poster and goes further in explaining the Yoruba goddess' significance, even going so far as to present the possibility that "Aunt Jemima may have been Yemoja herself."

Maitri explores some of the parallels between Hindu mythology and Yoruba cosmology.

And Adrastos is getting wild about Harry, and about moderating the politics panel:

I've been a busy bee organizing this year's politics panel, which thus far includes Clancy DuBos of the Gambit and WWL-TV, ace NOLA political cartoonist and WBOK radio talk show host John Slade, blogger extraordinaire Lamar White Jr. of CenLamar fame and perhaps a player to be named later. I'm not sure if Crash Davis is available or not. I'll be the immoderate moderator and along with throwing raw meat at the panelists, I'll offer some pithy and, hopefully, perceptive comments as well. We may even muss the eminent Mr. DuBos' well coiffed head for your amusement. It's just a joke Clancy, I may envy your full head of hair but I would never, ever muss it...

Big thanks also go to Adrastos for his instrumental role in getting our keynote speaker's participation this year.

We are enjoying the love we are getting from our followers on Twitter as well. Keep an eye out for us there and on this blog as we get more information to you on this year's panels and presentations.

Update, 9:22 AM: How could I forget Social Gumbo's latest on Rising Tide?

Posted by Leigh C. at Thursday, July 23, 2009
Big, BIG thanks to Greg Peters, award-winning cartoonist and a longtime supporter of Rising Tide, for his artwork for this year's conference: 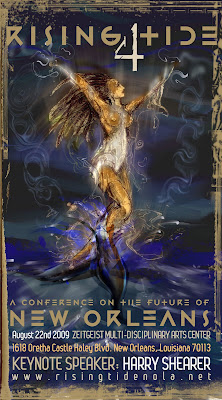 "The figure represents Yemaja, a Yoruba Orisha & owner of all waters, patron of fishermen and wreck survivors, and manifestation of the feminine principle of creation."

Posted by Leigh C. at Wednesday, July 22, 2009
One month from now...it will be here at the Zeitgeist Center.

New Orleans' own gathering of bloggers, those who read blogs, and those who are interested in our city and the issues that affect it.

and get ready for panel discussions on New Orleans culture four years after 8-29-05, the state of health care in the city, and our political landscape, current and upcoming (2010 mayoral and city council races, anyone?), as well as the presentation of the fourth Ashley Morris Award for Excellence in Blogging.

PLUS, this year's keynote speaker is... 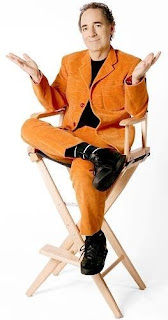 So please register now for a jam-packed day that includes lunch from Cafe Reconcile and an exploration of the ways in which we are sinking to new heights.