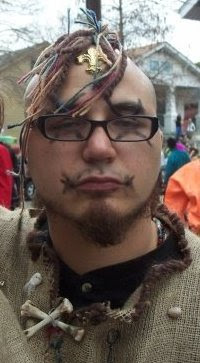 Lance "Varg" Vargas is a found object folk artist, graphic designer and blogger in New Orleans. He started his blog The Chicory in 2004 as an arts and culture Web site before altering the design and format into a blog in October 2006.

Before moving back to New Orleans in 2004, he was an Entertainment Editor (and infrequent Executive Editor) at La Jolla Light, a 90 year old weekly newspaper in La Jolla, California for six years covering the Museum of Contemporary Art, La Jolla Playhouse and D.G. Wills Bookstore. He also began a San Diego literature and social commentary site called Asunder Press in 1999. In San Diego he also wrote for: Revolt in Style, The San Diego Troubadour, and three cover stories for the Gay and Lesbian Times.

Varg began making and selling found object folk art in 2008 while renovating his Algiers Point home. His inspirations are humanism, soulful and spirited living and a disdain for waste or anything uppity. He is a member of the Jackson Square Artists Association committee.

He has been a graphic designer since 1999 and currently has a Web design business called Varg Visuals with more than a dozen clients in greater New Orleans.

His wife is Romy Kaye, a jazz and blues vocalist and a Standardized Patient Coordinator at Tulane School of Medicine.

He is the son of Ken and Caral, a sailor and a social worker.

He has been an organizer and the Web master for the Rising Tide Conference since 2008, and is the over-worked chair and sole member of the Keepin' It Real committee.