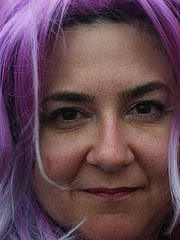 Val McGinley was raised Yankee and decided to go to college as far away from home as possible. When Tulane sent an acceptance letter all those years ago, she decided to move to New Orleans, sight unseen, as an 18-year-old freshman. She married a fellow Tulanian (from the borderlands of Cincinnati, OH) and despite having some aspirations to moveto other parts of the U.S. or world, they could never quite leave New Orleans, even when New Orleans didn’t want them to stay.

Val has worked at Tulane since 1995, traveling around the western hemisphere making grand plans and running programs in the hope that the general populace will learn that there are more countries than the U.S., Canada and Mexico (all the land south of the U.S. border, right?) and that more languages than English are spoken in North and South America.

She’s a die hard, naturalized New Orleanian since both of her children were born in New Orleans, including her youngest on Halloween, 2005, eleven days after returning from exile (there was no way in hell this Yankee/New Orleanian was going to give birth in Texas). She actively follows local politics and school reform issues and is a regular tweeter, which is all she seems to be able to fit into her rather overcrowded schedule. Val serves on the boards of the Partnership for Youth Development and the World Affairs Council of New Orleans. Having organized too many academic conferences to count, she was crazy enough to volunteer to help with Rising Tide. Val has been a huge help with programming and was invaluable last year at the registration table.